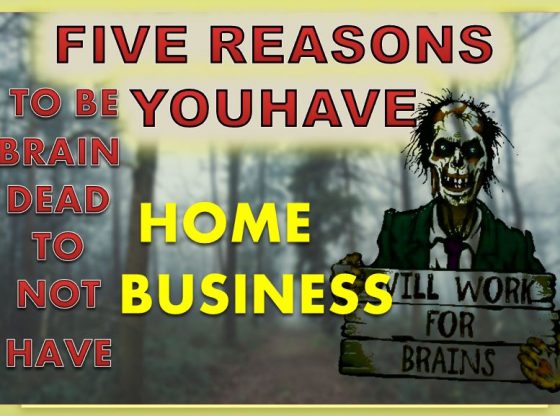 5. Why you would be brain dead not to have a small or home based business? – Sandy Boykins.

I am going to assume that you are not among  the extras on walking dead; that behave as mindless zombies walking, and groaning looking for their next meal. I want to assume you have the ability to reason, and you will see why number 5 is so true.

The tax laws for employees are not very flexible you are based purely on income. And end up with a higher rate, than the guy who writes the check. Why, because business owners are privy to tax deductions that employees aren’t. For instance, as an employee your home is leisure only, as an employer your home office makes your home partially a tax deduction. The list of deductions goes on, but this is just one small example of how the two tax laws differ.

3. You can actually get a raise and end up taking home less money.

Why is this the case, because the more income you have the higher your tax bracket. One of the flaws of our tax system has is exposed with this one small detail. It is possible to get a raise that changes your tax bracket meaning you pay more in taxes than the raise. Very seldom do people cross this line and see this, but we often times see the symptoms of this. Have you ever gotten paid over time, and instead of receiving a large bonus you notice a slight increase. The taxes ended up increasing with your wage. If you haven’t been a victim of this ask around, or even better wait your turn.

2. Most American Millionaires are owners of businesses. In fact half are self-employed or own a businesses.

Success leaves clues, and in the U.S. the clues point to business ownership. So, whatever your business it’s important that you own it. Now, the other 50% may get lottery winners, receive generational wealth, maybe even uncle Remus from another country leaves you a millions. Whatever the method of the other 50% is; we know that the other half actively took control of their future and because millionaires on purpose. Not through some fluke act that any of us would be lucky to have happen to us. But throw creating a building and a brand and growing it, has consistently been the way to become a millionaire.

Freedom is our biggest gift. The present (time) is called the present (gift). They didn’t even change the spelling. Time is the king no man can corrupt. -anonymous. Time is our greatest alley or our greatest competitor. With the ability to own your own business you control your work times, your vacation times, the locations you choose. Time will march on whether you make a decision or not. In fact I’m writing this article at 5am. Too early to work a conventional job, but with time as my alley I am still able to reach you and hopefully help you.